April 4, 2019 – Seville, Spain – Governor of Puerto Rico Ricardo Rosselló announced that the Island will host the World Travel and Tourism Council (WTTC) 2020 Global Summit from the 21st of April to the 23rd next year at the Puerto Rico Convention Center in San Juan.

The Puerto Rico Tourism Company (PRTC) and Discover Puerto Rico will host the summit, regarded as the most important event in the Travel and Tourism sector worldwide.

“The Travel and Tourism sector is instrumental in Puerto Rico’s economic development plans, and has proven to be the most resilient sector in our economy. More so, we believe that sound public policy that effectively attends to private sector needs can be a catalyst for change,” said the chief executive. Rosselló added that “events like the WTTC Global Summit not only give us an opportunity to showcase the diversity of our destination’s tourism offering, but also facilitate spaces for the public and private sectors to define the future of Travel and Tourism together.”

The announcement was carried out before the mayor of Seville, Juan Espadas. The vice president of the Andalusia Board, Juan Marín and the secretary of State for Tourism, Isabel Oliver, were also present. Travel and Tourism is one of the leading sectors stimulating economic growth and employment worldwide. In 2018, the global Travel and Tourism sector grew at 3.9 percent to contribute a record of $8.8 trillion and 319 million jobs in the world economy.

The executive director of the PRTC, Carla Campos, stated that “every destination has a moment in time to claim its place in the global Travel and Tourism scene; Puerto Rico is on the cusp of becoming a next generation tourism destination, and the WTTC Global Summit is the ideal stage to unveil how the public and private sectors are working together to make it happen.”

Campos also pointed out that “tourism is a force for good and an ideal vehicle to improve people’s quality of life. We share that vision with WTTC members and are honored to have the opportunity to host Travel and Tourism leaders from around the world in Puerto Rico next year.”

Meanwhile, Gloria Guevara, president and CEO of WTTC, stated that “we are delighted to bring next year’s Global Summit to the beautiful tropical Caribbean  island of Puerto Rico, a welcoming and diverse destination, which not only offers visitors glorious beaches, it is also home to the only tropical rainforest in the United States”.

Guevara added that “our annual Global Summit brings together the most influential figures from the public and private sector to address the challenges and opportunities facing the Travel and Tourism industry and is the most important event in the calendar each year. Hosting the Global Summit in Puerto Rico reflects the commitment and efforts of the government and tourist board to grow both business and leisure travel.”

For his part, the CEO of Discover Puerto Rico, Brad Dean, said that “we’re honored to have been chosen as host destination for the upcoming World Travel and Tourism Council 2020 Global Summit. Puerto Rico is a place where rich culture and natural wonders lay the foundation for an immense bounty of one-of-a-kind experiences”. Dean also stated that “we’re thriving as a destination of global importance and hosting this Summit will elevate even further our tourism offering, positively impacting the local economy. We look forward to welcoming the global tourism industry next year to discover all that Puerto Rico offers.”

Around 1,500 participants attended the WTTC Global Summit this year in the Andalusia capital of Seville. These included more than 100 leading executive officers, 300 media outlets, more than 20 ministerial delegations, as well as former heads of state and former officials, including the former president of the United States, Barack Obama. 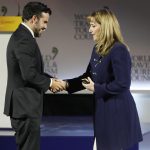